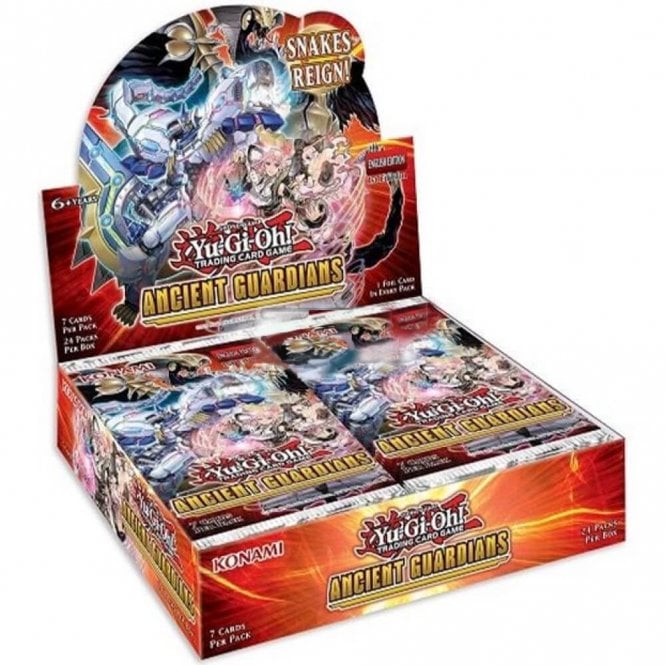 Information on the entire Ancient Guardians set available to collect from these packs:

Ancient Guardians unearths powerful new monsters in Spring 2021! This 60-card booster set introduces 3 brand-new strategies along with older cards that enhance them. As in Toon Chaos and Genesis Impact, 15 cards from the set will also be available as Collector’s Rares, and these will include a mix of new cards and older favorites.

A new Graveyard-based strategy rises to the occasion! Ancient Guardians will also include hard-to-find older cards to help make your Graveyard rain with monsters so you can pit them against your opponent.

Pendulum Summon and compose a brand-new harmony! Pay close attention to the Pendulum Scales of your monsters and maximize your Pendulum Summons. Ancient Guardians will also include classic cards for Pendulum strategies like Luster Pendulum, the Dracoslayer and Ignister Prominence, the Blasting Dracoslayer.

Finally, a new theme with a spin on Synchro Summoning so cool it’ll send a chill down your opponent’s spine! The “Ursarctic” monsters thrive in negative temperatures that use a modified way to Special Summon Synchro Monsters. Instead of looking at the sum of the Levels of a Tuner and non-Tuner, you look at the difference between their Levels instead! But, bear in mind that this isn’t a Synchro Summon! Start off with Ursarctic Polari, the first Level 1 Synchro Monster, which you’ll need to Summon Ursarctic Septentrion – an incredible Synchro Monster with the power to suppress the effects of monsters without Levels!