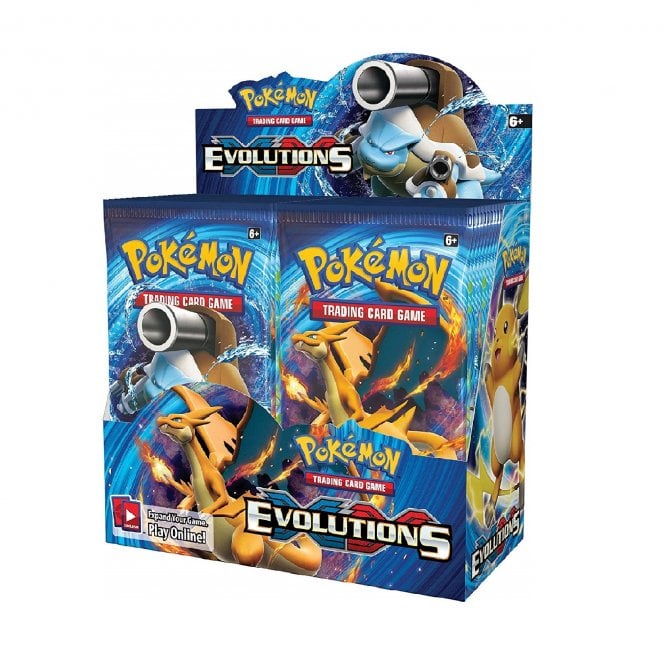 Evolutions is the 12th and final expansion in the XY Series for the popular Pokemon Trading Card Game. Taking us back to where it all began, XY Evolutions promises to feature a whole host of reprinted and updated cards from the original Base Set that was released way back in the 90s! Take a trip down memory lane or for younger players, experience the excitement of opening generation I Pokemon for the first time! Don't fret if you're a competitive player though, as XY Evolutions has plenty for you too! All reprinted Base Set cards have been updated to make them competitive in today's tournament scene and like expansion sets from the XY Series before it, Evolutions will feature new Pokemon-Ex and Pokemon BREAK cards! In XY Evolutions, the Pokemon legacy evolves and the very first Pokemon Trading Cards are restored to glory! With old favourites returning more powerful than ever before, like Mega Blastoise-Ex, Mega Charizard-Ex and Mega Venusaur-Ex as well as some exciting surprises like Ninetails BREAK and Machamp BREAK the classic hard-battling Pokemon and old-school trainers are reinvented for a new generation! The only thing left to do is to ask Professor Oak to get you started, and reach new heights with Pokemon XY Evolutions! The entire Evolutions expansion available to collect includes over 100 brand new Pokemon cards, opening up a whole host of new deck-building potential! These include 12 new Pokemon-EX, including 5 new mega evolution Pokemon and 4 new Pokemon BREAK cards!