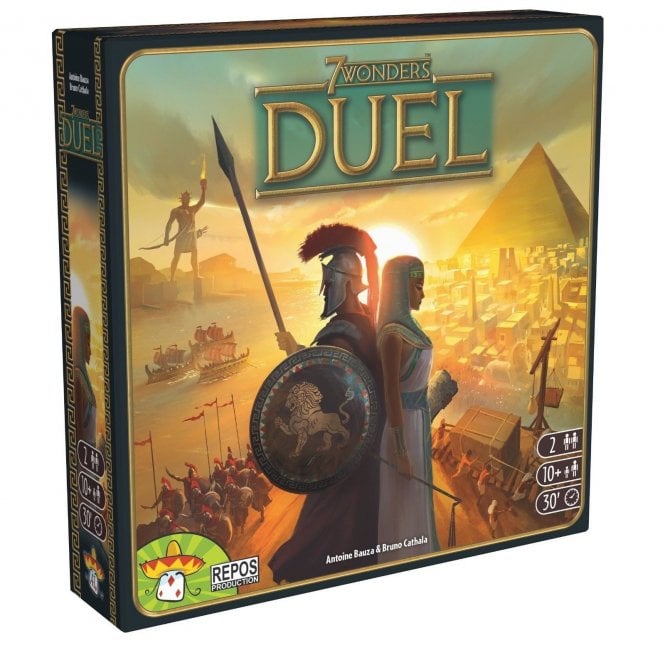 Code: UNS-ASMSEV-EN07
Loading...
+ In Stock Now Item in Stock Item out of Stock | Order before 3 pm for same-day dispatch

Please note:  These games are being sold at a clearance price due to the game being unsealed. The contents of the game are not damaged and none of the game pieces have been popped out of their cardboard sheets. The outer box may have some minor scuffs due to not being wrapped.

Experience an intense two-player struggle for supremacy in the ancient world!

Designed by Antoine Bauza and Bruno Cathala, 7 Wonders: Duel adapts the gameplay and excitement of 7 Wonders for one-on-one battles. Choose the Wonders you aim to build and guide your city through three Ages of drafting cards from cunningly shaped tableaus. Victory can be achieved in three ways: by invading your opponent's capital, by achieving a monopoly on scientific advancement, or simply by crafting the city that will earn the most victory points in the end. But be warned: only seven of the eight Wonders in play can be built. Will your city achieve greatness, or will your opponent prevent you from completing all your Wonders?

"So that the things done by mankind do not fade in time, and so that neither the deeds nor wonders, whether executed by Greeks or barbarians, become forgotten, and other things—and on account of what reason they fought each other." -Herodotus, on the purpose of writing his Histories
When the Persians invaded Greece in the early fifth century BC, they recognized that only one civilization could prevail in the eastern Mediterranean. Both had made remarkable inventions: theatre, philosophy, gardens, laws. Both had constructed magnificent monuments that made it onto the canonized list of the world's seven great wonders. Both had incredible scientific knowledge and military might. Nevertheless, it was impossible for them to peacefully coexist. One had to triumph and the other had to fall.
In 7 Wonders: Duel, you and your opponent each lead an ancient civilization to greatness—but only one of you can win. Over the course of three Ages you both draft cards, advancing your civilization one development at a time. You can choose to become a military superpower and conquer your opponent in battle or seek scientific supremacy. You can bolster your economy with markets and ports or create great public works like aqueducts and senates. Above all, you can build magnificent wonders which will give your civilization lasting renown and ease your path to victory.