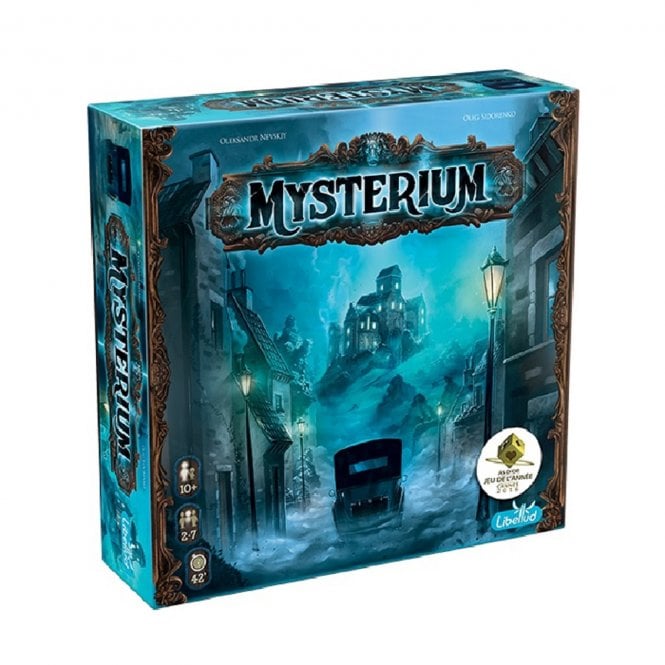 Code: DAMLIBMYST01US
Loading...
+ In Stock Now Item in Stock Item out of Stock | Order before 3 pm for same-day dispatch

Please note: These games are being sold at a clearance price due to the box being damaged (please see product images). The contents of the game are not damaged and all of these games are still sealed

Mysterium is an innovative, immersive and thrilling party game. It offers cooperation and investigation with asymmetrical gameplay. While playing the ghost or a medium, you will have fun trying to guess what other players have in their mind. Enter the manor and let yourself be led by your sixth sense.

Thirty years ago, a servant was murdered in his employer’s mansion during a party. A group of mediums organize a séance to solve the mystery. The ultimate goal of the ghost is to indicate who killed him, where, and with what weapon. A series of illustrated cards are laid out for each of three stages: one for suspects, one for locations, and one for murder weapons. One person plays as the ghost. This player may not directly communicate with the other players, who play the mediums; however, the mediums may collaborate. The ghost secretly selects a suspect, location, and murder weapon for each medium to guess. Each round, the ghost hands out one or more illustrated cards to each medium. Mediums progress through the stages by correctly guessing their respective suspect, location, and murder weapon. Players may indicate whether they believe guesses to be correct or not through tokens. If all players have advanced past the third stage by round seven, the ghost gives a final clue as to which medium holds the true identity of the ghost's murderer. Depending on how quickly players advanced through the stages and how many correct tokens they have placed, they may see one, two, or three cards from the ghost. Players may again collaborate on interpretation of the cards, but their final vote must be secret. If the majority guesses correctly, the players win and the ghost is set free to enjoy the afterlife.