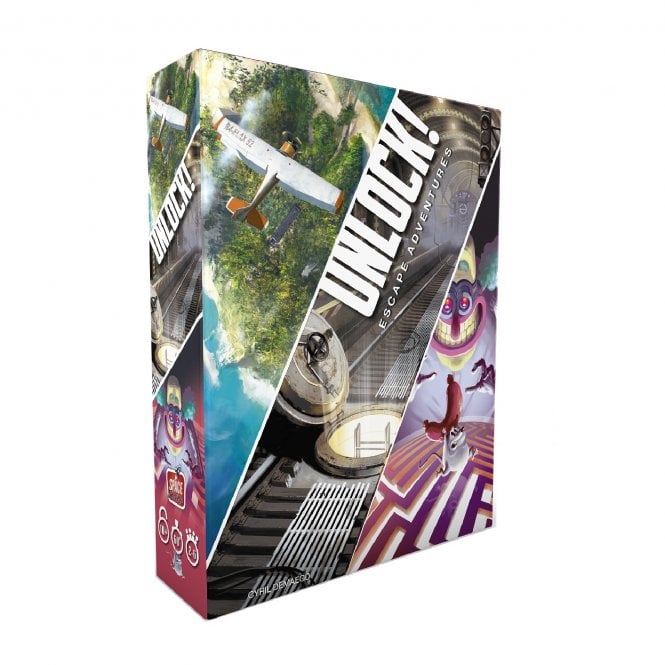 Escape rooms are the rooms you need to escape from in less than 60 minutes. UNLOCK! lets you live these experiences at home around a table.

The Island of Doctor Goorse

The day had started off well. After weeks of hesitation, you finally accepted the invitation of Archibald Goorse, the eccentric billionaire, archaeological rarities collector. You’d been flown to his private island, located a few miles from the Bahamas, in an old twin-engine. Unfortunately, the aircraft had been caught in a storm and you only just had time to bail out with a parachute before seeing the plane crash land in the middle of the jungle. After losing consciousness, you wake up on a windswept beach. Fortunately, despite some bruises, you have nothing broken. Instead, your group is now split in two teams.

How are you going to join forces to successfully leave this cursed island?

The Department is concerned by the lack of recent reports from Dr. Hoffmann. This genius chemist is involved in the MK project. In his last report, he claimed that his “truth serum” was close to the required reliability. We want Hoffmann and his formula.

The team will be taken to the subway station (CLASSIFIED) and will infiltrate the lab, which opens with the code (CLASSIFIED). You make your way through the maze of New York subway tunnels. In the middle of the tracks, you find a trap door in the ground. It’s open and light shows through it.

Blasted Professor Noside! Once again, your old enemy has stirred up an evil plan, but you have courageously slipped into his headquarters to prevent it. While you wander in the corridors of this old shack, a trap door opens beneath

your feet and you fall into a dark and damp dungeon. Your screams will not help you: you’re prisoners of the professor. The world is lost forever... Unless you get out of here and sabotage the plans of Noside. You are our last hope.